Hypothesis testing in research can be referred to as the act of testing an assumption related to a population. Researchers test this assumed truth by examining data collected from members within that population and determining whether or not there is enough evidence in favour of it being true – meaning, if the results show significant proof that supports what was originally hypothesized then it becomes accepted as fact; otherwise, any assumptions are dismissed until more information comes along to support them. 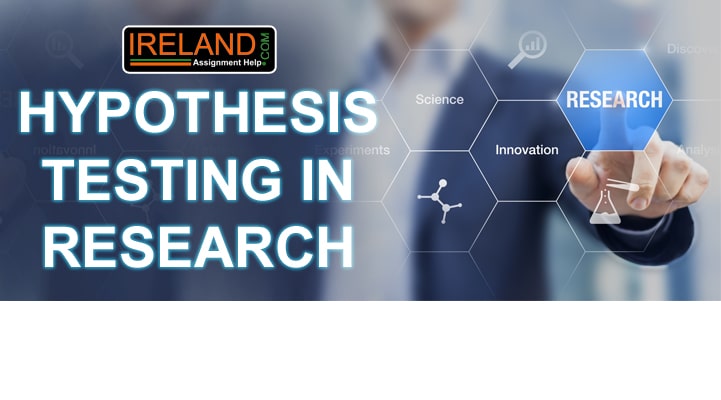 Hypothesis testing is a formal process that includes the investigation of ideas about the real world by utilizing statistics. Testing of a hypothesis is mainly done by scientists for examining their predictions known as a hypothesis that originates from theories.

How to Test a hypothesis in research?

The 4 steps of the testing hypothesis in research  are:

Before testing the hypothesis you need to create a hypothesis (it means develop predictions on which you want to perform an investigation. It is very much important for you to write the null (H0) and the alternative hypothesis (H1) so that they could be tested using mathematical formulas.

An alternative hypothesis is considered to be an initial hypothesis that helps you in predicting the relationship between variables.

For example: If you intend to perform for the investigation to test whether there is a relationship between height and gender. On the basis of your knowledge about human physiology you can design a hypothesis that men are taller than women. You for testing the hypothesis need to restate it in the following manner such as:

H0, Men on average are taller than women.

H1: Men are on average are taller than women.

For making statistical hypothesis testing research to be valid, you must execute the sapling and collection of information in a manner that is formulated to test the hypothesis. If the information is not representative, then you cannot make statistical inferences about the population in which you are interested.

While making a selection of samples you should cover all socio-economic classes. At the time of selecting a sample you should consider other variables that might influence average height.

If in case there is great variance in a group and lower between different groups variance, then the statistical test will represent a high P-value. It means that any difference you measure between groups is due to chance.

At the time of making the selection of statistical tests, you need to consider the type of information you intend to gather. Based on the information which you have gathered, you can perform a T-test to find whether the height of boys is taller than girls or not. T-Test enables you to get:

P-value which has been generated through statistical test is 0.002 which is below maximum which is 0.05. If your hypothesis s less than 0.05 then you can make a decision related to the rejection of the hypothesis.

You should summarise the outcomes of the statistical test.  In the discussion chapter, you should facilitate debate on whether the primary hypothesis should be accepted or rejected.

Therefore, you can refuse the null hypothesis that is boys are not as tall as compared to girls. It can be concluded by analyzing the outcome of an investigation that there is a little difference between the height of boys and girls.

Example: It has been concluded from an assignment that the difference between the mean height of both girls and boys is 14.3 cm and the p-value is 0.002.

Maintaining the consistency in hypothesis there is variation in the height of girls and boys. Such variation is considered to be superficial which means that these difference have some meaning.