The extent to which a study shows a reliable cause-and-effect relationship between a treatment and an outcome is known as internal validity. Internal validity in research also denotes the ability of a study to rule out alternate causes for a result.

However, there are always ways for professional scholars like those from Ireland’s Assignment Help company who help offer detailed explanations on what these types of studies entail! 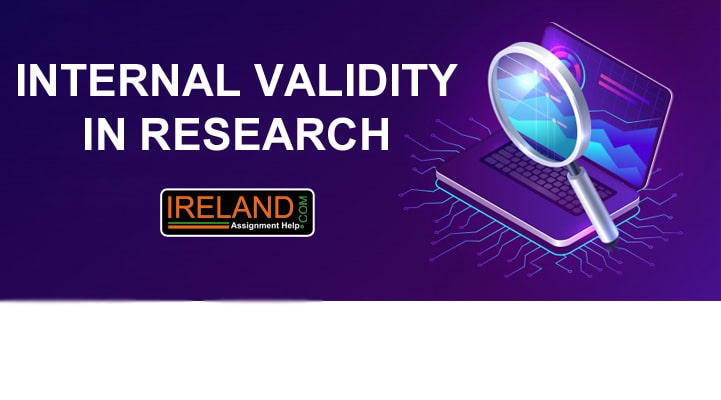 What is Internal Validity?

Internal validity in research is a level of confidence that the test you have performed for judging the causal relationship between variables is reliable. It is considered to be one of the important measures, particularly in Quantitative research.

An internal validity helps in making sure that the experiment design which the researcher has to choose properly follows the principle of cause and effect.  You must consider internal validity, particularly in scientific and social science research.

Demonstrating trust in the relationship between cause and effect is one of the finest methods to describe internal validity. For example, a physics experiment was done to investigate the effect of heat on metal conductivity, and the results were found to have excellent internal validity.

Almost all potentially misleading variables can be eliminated, and tight controls can be established to isolate other variables.

For example the different types of variables are profession, ethnicity, education, social status, etc. You can not eliminate such variables from the study. It is internal validity which helps in demonstrating that you have evidence that proves that findings have a significant influence on results.

Example 2: An investigator performs research for analyzing the influence of computer programs specially designed for teaching on traditional classroom teaching techniques. The finding of the study reveals that children who are taught using computer program learn quickly.

Another thing which has been discovered from the research is that due to computerized teaching there has been great improvement in grades of children. However, research that other investigators perform reveals that children who are taught using the computer program feels that they are not gaining attention.

An experiment still represents high internal validity, as study manipulation has influence. But investigations perform for research paper has low construct validity, as the cause is not clearly stated.  A researcher mainly emphasizes attention rather than the benefit of computer programs.

How do you know if your research has internal validity?

Blinding: Participants—and sometimes researchers—who are uninformed of the intervention they are getting (for example, by using a placebo in a medicine study) avoid their views and behaviours, and hence the study’s outcome, becomes skewed.

Experimental manipulation: Instead of simply monitoring an association without doing any intervention, manipulating an independent variable in a study (for example, offering smokers a quitting program) (examining the relationship between exercise and smoking behaviour)

Random selection: Choosing participants at random or in a way that they are representative of the population you want to research.

Randomization: is the process of assigning people to treatment and control groups at random, ensuring that there is no systematic bias between the two groups.

Study protocol: Adhering to particular methods for the administration of treatment to avoid any unintended consequences, such as doing things differently with one set of people against another.

How do maintain the internal validity of the study?

You can’t have confidence in experimental design, as there are high chances of error. There are several tools that researchers can utilize for confirming the internal validity of the study and establishing causality.  These tools are:

For example:  An investigator has performed an investigation for analyzing the learning capability of Greek students. The findings of study represent that students who were taught using computer programs learn in better manner.

It means that if you utilize the computer outcome it will help you in generating positive outcomes. In case, a computer program is not utilized by the researcher that means there will no outcome.

What factors can affect the internal validity of the study?

The 7 factors which can threaten the internal validity of research are: